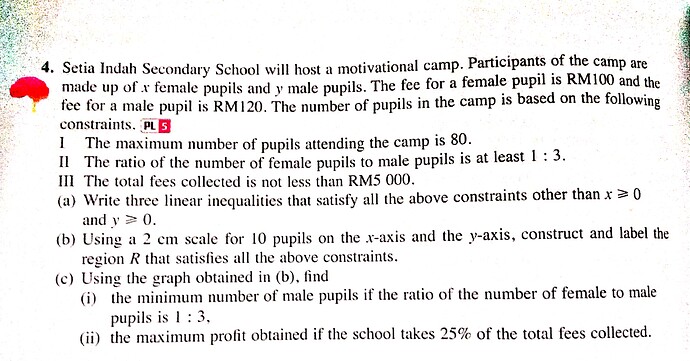 I The maximum number of pupils attending the camp is 80 .
Il The ratio of the number of female pupils to male pupils is at least 1: 3.
III The total fees collected is not less than RM5 000 .

(a) Write three linear inequalities that satisfy all the above constraints other than x \geqslant 0 and y \geqslant 0.
(b) Using a 2 \mathrm{~cm} scale for 10 pupils on the x -axis and the y -axis, construct and label the region R that satisfies all the above constraints.
(c) Using the graph obtained in (b), find
(i) the minimum number of male pupils if the ratio of the number of female to male pupils is 1: 3,
(ii) the maximum profit obtained if the school takes 25 \% of the total fees collected.