[SPM Physics Gravitational Question] Why my answer is incorrect?

(i) Hitung laju linear satelit A yang mengorbit bumi pada ketinggian 1500km.
Calculate the linear speed of satellite A orbiting the earth at an altitude of 1500km.

Hi Farhaini,
Orbital speed and escape speed are two separate things.
Escape speed is v=\sqrt\frac{2GM}{r}, where the satellite orbits fast enough to escape into outer space (to infinity and beyond~)

It is derived from equating loss in KE with gain in GPE.

Orbital speed is v=\sqrt\frac{GM}{r}, where the satellite will orbit in a circular motion and cannot escape into outer space. (In reality, the path should be elliptical, but what I learned for A-levels is that we assume it as circular since we only learned Kepler’s Third Law, I’m not so sure about SPM as you all learned all 3 laws) 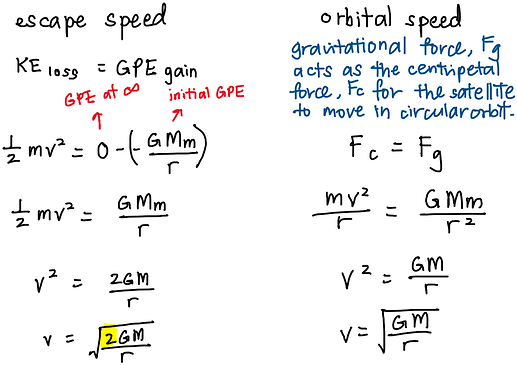 Thank you very much for helping me!